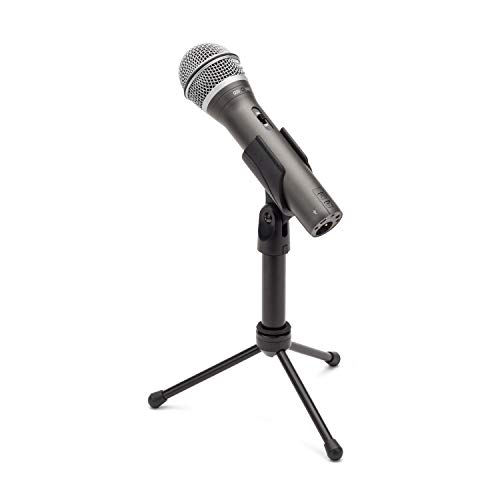 Samson Q2U USB Microphone Recording and Podcasting Pack comes with a microphone, a desktop stand, a desktop stand extension, mic clip, USB cable, and XLR cable. It has all the basic peripherals needed to create audio either digitally or manually.

The USB plug works with any desktop, laptop, and tablet, as well as with any operating system like Windows and Android. It does not need any software to work as it is plug-and-play. The XLR plug, on the other hand, also works well with any console or mixer.

The microphone itself is very durable as it has a solid die-cast body. It is omnidirectional and captures only the important sounds from the recordings. It also has a plug for a 3.5-mm headphone, with volume adjustment.

Samson Q2U USB Microphone Recording and Podcasting Pack has both pros and cons, but the advantages obviously outweigh the disadvantages of buying this product.

Firstly, this product comes from Samson, which had established its name in the microphone production industry. Secondly, it is way more affordable than other brands that deliver the same output quality. Thirdly, it can be used anytime, anywhere, and with anything, since it is versatile. Lastly, it makes recording and broadcast sessions more efficient.

However, this pack does not come with a storage case, and the microphone needs a pop filter to ensure that plosives do not get distracting.

Just like its more pricey counterparts, one of which is Audio-Technica ATR2500, this product delivers what it promised. It can be used with the USB connector or with the XLR connector. It records and broadcasts really well. It comes with all the important accessories.

There is no significant difference between the two other than the price.

Overall, the Samson Q2U USB Microphone Recording and Podcasting Pack is worth every penny as it can be used for a long time because of its durability. It can serve a lot of purposes, and it helps the user be more efficient and effective, and it is a brand that users can really count on.

No one can imagine life without a microphone. This device serves very important purposes in any industry. A seminar, video conference, or training will not be effective if there’s no microphone. Similarly without the best headset for conferencing, you won’t catch everything that is said. A Skype or Hangouts video or audio call will not happen without a microphone. People may not have noticed, but microphones are present if there’s a mobile device present.

It all started in 1827 when Charles Wheatstone invented the term microphone. It was just a concept back then. Not until 1876, there was no real microphone. The one who developed this wonderful device for transmission of telephone voice was Emile Berniler.

Microphones work by converting sound energy into electrical energy. The two have almost the same waveforms. After doing its job, the speaker turns the electrical energy back into sound energy for all the people to hear. A good quality microphone is essential because it produces the raw element of a transmitted sound.

Since 1876, a lot has changed with the microphone. Currently, microphones are more commonly used digitally. People speak to one another using built-in microphones in their mobile devices. “Podcasters” and “YouTubers” use the microphone to record audio and video for people’s entertainment.

Is the Samson Q2U worth it?

The Samson Q2U is a dynamic mic with a cardioid polar pattern. The unique aspect of this mic is that it works both with XLR and USB mode. You can use it with your computer directly, or else you can connect it with a mixer or PA.

The mic has a good frequency response (20Hz–18kHz) and comes with a desktop stand, tripod stand, and boom arm for easy use.

Since this is a dynamic mic, it is not meant for very fine-quality audio recording. Instead, the Samson is a great mic for applications where you may expect more noise, such as live interviews, news reporting, and live shows. You can also use it for home setups of YouTube videos, streaming, and gaming.

Is Samson Q2U good for vocals?

Despite being a dynamic microphone, the Samson Q2U has a good following in the vocal scene, especially for garage bands that are louder and need an inexpensive mic to start. Its dual connectivity to XLR and USB makes it a versatile mic that you can practice on alone in your home setup and then with your Garageband.

No, this is a dynamic mic. It does not need phantom power even in XLR mode.

Do you need a pop filter for Samson Q2U?

Yes, the Samson Q2U does not come with its pop filter, so I would suggest that you should get one separately.

Can I use Samson Q2U with iPhone?

How do I set up my Samson USB microphone?

First, connect the Samson USB mic to your laptop or computer using a USB cable.

Go to the bottom right of the screen, right-click on the speaker icon, and select Sounds.

Next, go to the Recording tab in the panel that opens up, look for your Samson USB mic and select it as the default device for audio.

Next, go to the Playback tab and select Samson USB mic as the default output device for audio.

Now plug your headphones into your laptop, and speak into the mic. If everything is correctly done, you should be able to hear your voice in the headphones.