Want your music to match the quality of top artists in the biz? Sometimes it comes down to using the right equipment. See best home studio package reviews also.

Sonny Moore, AKA Skrillex, is one of the hottest dubstep music producers in the industry today. Alongside Diplo they form the duo Jack Ü. They’re known for working with major artists such as Justin Bieber, Lady Gaga, and Madonna — to name a few.

If you’re ever going to make it big, you need a sound quality to back it up. Which is why we’ve put together a list of the tech that Skrillex uses himself to create the sick beats he’s known for.

Want to get a peek inside the Skrillex studio setup? Continue reading for a look at the tech this producer uses to make his music and tips for doing it similarly.

You don’t get four EPs, eight GRAMMY Awards, and DJ at 300 shows a year without doing something right. Skrillex’s success comes from a combination of pure talent and some nifty software. It’s time we started taking our tips from the busiest and biggest dance producer on the planet!

For the most part, Skrillex considers himself self-taught, although he did have a friend who helped him out in his early days. He showed him the basics of mixing, compression, and EP. However, being a Rock producer, he didn’t have the same sound that Skrillex was aiming for.

Want to take your own skills to the next level? Let’s take a look through some of the ways Skrillex creates his signature sound.

When it comes to mixing beats and organizing tracks you need a software program that can keep up. That’s why Ableton Live has become a staple in the world of top DJs. Both Skrillex and Diplo say they use it.

If you’re going with the Ableton Live DAW setup, then you’re probably going to want to pair it with a Macbook Pro. Skrillex prefers this setup and says that it makes for an intuitive flow that is easy to use for laptop producers particularly.

If you’re wondering how Skrillex creates those amazing soft synthesizers his personal favorites are Massive, FM8, Sylenth1, and Tone2 Gladiator. He also uses Operator which is Live’s FM Synthesizer.

Mainly, he likes to keep it simple and stick to FM8 and Massive. Although he has mentioned Native Instruments as being another one of his go-to’s. Since these two are the ones he is most comfortable with. Skrillex is able to create sounds by manipulating artist voices as well as his own.

Skrillex wouldn’t be Skrillex without that familiar monster base. He uses Massive and FM8 to create that killer sound. When it comes to dropping seriously hard beats, Skrillex uses 200Hz with whatever sample he’s using.

You can determine this by looking through a spectrum analyzer. For that moment your drum should be the loudest element in your mix.

To create amazing vocals Skrillex uses Melodyne as his primary software. He rarely leaves a vocal unprocessed. He likes to create beats from vocals as well as stuttering sounds and other unique effects.

He also records vocals into the Saffire with an SM58 and then scratches it with loads of plug-ins. However, he doesn’t do much vocoding. Instead, he likes to use vocoding for guitar notes.

When it comes to mastering, Skrillex feels like there’s no secret to it and more about getting the mix right.

What he does use is iZotope Maximizer. He uses a little bit of EQ and harmonic excitement. Otherwise, he feels that Mastering is given too much credit.

He’s even mentioned that if he had to take one piece of gear on the road with him it would be iZotope’s Trash. He likes how he can throw a sound on it and create something completely different after playing around with it for a while.

Part of the fun in trying to emulate another artist’s music is finding your own sound in the process. When Skrillex was working on his Monsters sound, he was actually copying Noisia‘s synthesis at first.

It turned into its own growly sounds that he was able to create using FM8. This and element that Skrillex enjoys the creation of beats and new sounds. Sometimes they just happen by accident.

How does Skrillex find his equipment and programming software? He goes off of the recommendations from other artists he respects. That’s how he found FM8, after hearing that Noisia was using it.

It’s great to hear what other artists are using since it’s difficult to start new without knowing its benefits. Once you get comfortable with your setup, you may not want to mess with it.

When it comes to getting your studio right, there’s a lot of equipment out there that can help you get the job done. Skrillex’s studio might be simple but his master editing techniques might be hard to imitate.

Once you’ve put together your perfect studio, try manipulating your own sounds and beats. Ultimately, the end result comes from having fun and playing around. When you have the right equipment, it can help you get there more smoothly.

Interested in finding the right equipment for your studio? Check out some of our other mic round up reviews and equipment. 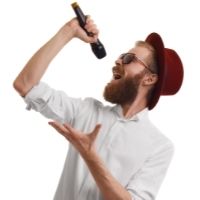