How Does A Microphone Work? 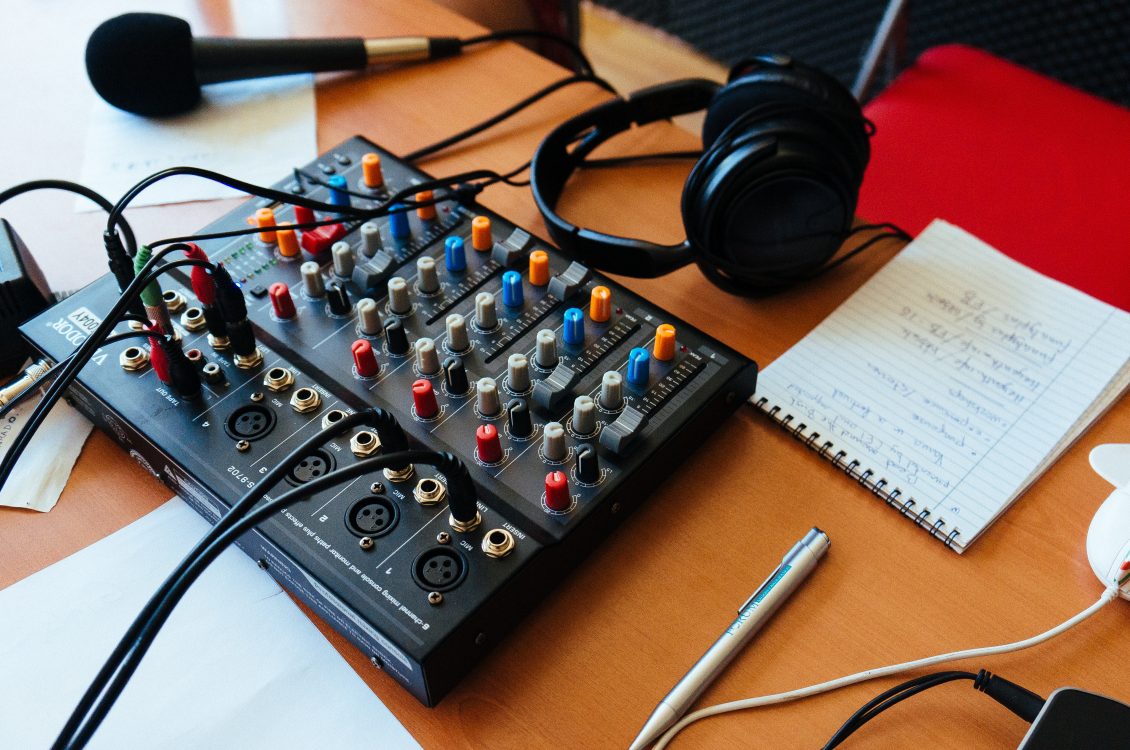 Everyone has been there.

One microphone. Two people. The need to sing “Girls Just Want To Have Fun” with your bestie. The awkward share the mic session that ensues.

But, while belting out your favorite tune, did you ever wonder how the mic you’re fighting over works?

The microphone is a complicated and interesting piece of equipment. It’s intricately made to produce big sounds from voice or instruments.

So, how does a microphone work? Read on to find out.

A Bit of Background Noise

Talking to a handful of people at the same time is easy. Talking to a whole auditorium full of people is a little harder. When you need our voice to be louder, the microphone is the tool you use.

The simplest definition of a microphone is a device which amplifies sound. Microphones convert energy into an audio signal.

Emile Berliner, while working with Thomas Edison, invented the first microphone in 1876. He took the technology Edison had put in the microphone and applied it to amplifying the voice instead of transmitting it through the line.

Along with the microphone, Berliner also invented the gramophone and the very first records.

His work in the music industry continued and he also invented the acoustic tiles you’ll find hanging in concert auditoriums to this day.

Now that you know who invented it, let’s get down to business. How does it work?

Consider looking at the microphone as a transducer. At the most basic level, like most simple machines, the microphone turns one form of energy into another.

In this case, sound energy, our voice, or the sound energy of an instrument, gets turned into electrical energy. This energy is then amplified to become louder and stronger. Finally, the energy is transmitted into the environment through speakers that can re-create the amplified energy back into the original sound only loud enough for everyone to hear.

If you’re recording it takes the energy and pumps it into the machine you’re using to record it and that machine interprets the energy as sound.

How Does a Microphone Work?

They’re used in different environments (i.e., in a studio, at a live venue). No matter the type of microphone, they will all have one common component — the diaphragm. This is the component that changes according to the type of mic you’re using.

For voice and studio recording with a professional microphone, you want the sound to be pinpointed. So, a condenser mic is going to be the best choice. For live performance, you’ll want a more dynamic sound to fill the room so a dynamic microphone will do a better job.

Let’s take a closer look at the microphone diaphragm and what it does.

What is a microphone diaphragm?

The diaphragm is a thin piece of material which vibrates when sound waves hit it.

Think about the diaphragm like your eardrum. It catches sound pressure coming in, reverberates it, and sends it into the next phase. In your ear, that’s your brain. In a microphone, that could be a speaker or recording device.

Diaphragm position depends on the type of microphone you’re using.

What does the diaphragm do?

In a hand-held microphone, the diaphragm is in the head of the microphone. The head is where the sound enters the mic (you know the bit you blast those syouet tunes into).

The vibrating diaphragm then causes other parts of the microphone to vibrate. It’s these vibrations which get converted into an electrical current. The end product is an audio sound.

How Many Types of Microphones are There?

These are the most common types of microphones:

Dynamic microphones are the most versatile.

They have few moving parts, are more resistant to moisture, and are the most robust. This type of microphone holds up to the constant abuse of live performance. It can withstand throws and drops with ease.

But, how does it work?

How does a dynamic microphone work?

An electrical current is produced in a wire coil when a magnet gets placed near it.

In a dynamic microphone, a diaphragm attached to the coil vibrates when sound waves hit it. These vibrations cause the coil to move pass the magnetic field it creates.

This creates an electrical current which moves away from the microphone along wires.

What is the best use for dynamic microphones?

These are the mics you can spot from the mosh pit if you’re lucky!

Condenser microphones are the types you would find in the recording studio.

That place you will end up when a talent scout spots us and signs us to their record label at the karaoke bar!

Condenser mics are sensitive to loud sounds, so are perfect for picking up the slightest of details.

How does a condenser microphone work?

Diaphragms in these types of microphones are in the form of two thin plates on either side of a capacitor. A capacitor is something which stores electrical energy.

These plates vibrate when sound waves hit. The vibrations of these plates then create the electrical signal.

The former are the ones you’ll see in a professional recording studio. The latter is a more streamlined version and is often used in podcasting, radio, or interview situations.

What is the best use for condenser microphones?

Condenser microphones are best suited to vocals and acoustic instruments in the studio.

It’s rare to see these being used during live performance. They are more expensive than their dynamic counterparts and far more fragile. One bounce off the stage and there goes your mic.

Studio recording, interviews, and other similar applications would best be served by a condenser microphone.

Next up is the ribbon microphone. These were most popular when radio was at its peak. But, it is making a comeback due to its ability to provide that warm vintage sound of yesteryear.

How does a ribbon microphone work?

A thin strip of corrugated aluminum, the ribbon, is position between two magnets.

Ribbon microphones react to the velocity of air particles rather than the pressure. As the ribbon vibrates, it creates a frequency response in the form of an electrical signal.

What is the best use for ribbon microphones?

Older models get damaged by laying them on their sides — not one to use for those rowdy karaoke sessions.

Even though the modern-day ribbon microphones aren’t as delicate care is still needed.

These types tend to work best with acoustic instruments. Like guitars and violins, as they tend to pick up sound better.

Now for the USB microphone.

USB stands for Universal Serial Bus. This is the industry-standard way of connecting different electronic devices.

How does a USB microphone work?

No fancy sound engineering degree needed to use these. you don’t even need anything else to help make them work either.

As long as you have your laptop close by you can turn any room into a recording studio. In fact, let’s leave the laptop behind and use a smartphone.

Now you can record on the go.

The biggest advantage of a USB microphone is that it is portable.

Even the earphones you get when you buy a new smartphone will have a built-in microphone.

This means you have a microphone in your pocket.

To restore equilibrium in the audio world, the USB microphone also has a big disadvantage.

That being the sound quality.

Let’s face it, you can’t expect to produce any award-winning albums using your headphone mic!

What are the best uses for USB microphones?

There are some excellent USB microphones out there.

They are perfect for voice-overs, podcasts, internet radio broadcasting.

Even general chit chat during a video call.

All the microphones mentioned above convert sound energy into electrical energy.

Wireless microphones go a step further. They convert the sound created by the microphone and then send it as a radio signal.

How does a wireless microphone work?

These signals work similarly to TV and some radio signals.

A receiver tunes in to the same frequency as the transmitter. The signal gets picked up and converted back to a sound signal again.

Each wireless mic needs its own frequency. These also include different frequencies of local TV and radio stations. Otherwise, the signals interfere with one another.

You end up getting a hot mess of sound as nothing will get picked up.

Don’t think that by not having wires there will be less equipment, far from it. A wireless microphone needs its entourage of a transmitter and a receiver to work.

You can’t talk about microphones and not speak about polar (or pick up) patterns.

Polar patterns help us to decide which mic is best for a particular situation. Filmmakers pay special attention to this.

Each microphone has its own polar pattern.  A polar pattern describes the mic’s sensitivity to sound coming towards it. The sound’s direction affects the level of sensitivity.

These mics pick up sound equally from all directions.

The pattern here is a sphere. It’s great for picking up sound from a group of people. It is prone to feedback noise, though.

These mics pick up sounds mainly from the front. Its pattern is heart-shaped. Great for two people singing together.

These mics pick up sound mostly from the front and a little from behind the mic. Its pattern is mushroom-like.

Understanding a mic’s polar pattern will help you decide where to place it to get the desired sound.

Now you can stop asking, “How does a microphone work?” and start thinking about which power ballad you are going to belt out.

In fact, you should level up and think about getting your own karaoke microphone. Then the party doesn’t have to end when the bar closes down.

You’ll finally be able to claim that karaoke crown!

Want to learn more about sound recording and performance? Check out our microphone advice section to find all you need to know about how to use your new mic.