The Shure SM58 has been a long-time staple of the music industry. An illustrious combination of quality and cost, it is widely used in both recordings and live performances. However, AKG developed a strong contender to try and unseat the SM58’s long reign. The D5.

Recently, there’s been some debate over which is the superior microphone. Some users continue to swear by the SM58 as a measure of real value and construction. Alternatively, there are others switching to the D5 and claiming it suits their needs far better than the SM58 ever did.

But who is right? At Best Studio Mics, we endeavor to give you the whole picture on which microphone really is better, the AKG D5 or Shure SM58. In order to find out, simply have a look at how each one performs in various categories. 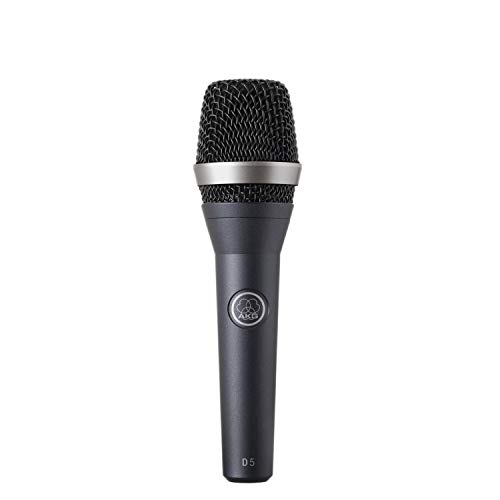 Of course, when wielding these incredible microphones, the first thing you’re going to notice is their appearance. They are both good looking microphones, but for different reasons.

The AKG D5 is a sleek and sophisticated microphone. With its all-black build, it subverts the typical microphone’s appearance. Instead, it’s far more …

On the other hand, the Shure SM58 is exactly what you picture when thinking about microphones. A simple black handle, topped by a steel ball mesh grille creates the conventional design found on stages across the world.

Personally, I prefer the design of the D5. Though, it’s for no other reason than a break from tradition. I don’t see anything wrong with the look of the SM58, but it lacks excitement and innovation.

Build quality is an incredibly important feature of any microphone. The last thing anyone needs is a microphone breaking while on stage, or in the middle of recording. The better it’s built, the more likely it is to survive any accidental damage or natural wear and tear.

The housing for the D5 is certainly up to scratch. Thanks to the D5’s rugged diecast metal housing, it is certainly able to withstand a few knocks – and any other tribulations of live performances.

The durability of the SM58 is definitely impressive too. It’s specially designed by Shure to be well-suited to tour life, even including a break-resistant stand adapter to keep your performances going strong.

Neither microphone stands above the other here. Both are designed to be taken on trips and tours, and can easily withstand some accidental damage. Despite this, do your best to look after them, because the more you look after them the longer they’ll last.

You may disagree with my choice for the winner here, and that is fine. That’s because the polar patterns have different effects, and are more useful in differing situations. If you need a specific pattern for your usage, then feel free to swap the winner in your mind.

The D5 makes use of the super-cardioid pattern, which has a tighter pick-up angle than the SM58’s cardioid and offers more side rejection. What this means is the D5 is better at isolating the user from a loud environment, be it room noise or a bandmate’s instrument.

On the other hand, the SM58’s cardioid pattern allows for a wider pickup. This makes it useful for two singers to share, or forgive solo vocalists whose microphone technique may not be as accurate.

Ultimately, if you want individual mics for each singer, or to limit the amount of feedback from louder environments, then the D5 is the better choice. Alternatively, if you have a more relaxed stage attitude, you may find that the SM58 keeps you sounding clearer throughout your performance.

What it all comes down to is the sound quality. It’s the most important aspect of a microphone, and something they both do extremely well. These are quality microphones, and neither is a bad choice.

Looking at it purely from a vocalists’ perspective, the D5 is superior. It picks up every aspect of your voice and reproduces it in crystal clear detail. The D5 may struggle to pick up deeper bass notes, but simply moving your lips closer should help with that.

In comparison, the SM58 is a little muddier. Vocals don’t come through as clearly as they do on the D5, but it’s certainly more effective at picking up instruments. Bass notes come through slightly better on the SM58 too.

Both microphones are exceptional, but the D5 just beats the SM58 in terms of clarity and range.

I have found the D5 to be the better of the two. When you consider that it’s also the cheaper microphone too, it only solidifies the fact that the D5 should definitely be worth checking out for anyone looking to purchase a microphone.

It’s definitely a solid microphone, that looks great and can easily withstand the wear and tear of excessive use. Just make sure you keep it close to your mouth to take full advantage of its super-cardioid design.

As always, different microphones suit different people better, so don’t simply dismiss the SM58 because I prefer the D5. Shop around, and try it for yourself. See which microphone is best for you, and then why not tell us in the comments what you think? Maybe you’ve found a new mic on the scene that’s better than both the ones listed here? If so, let us know in the comments!

What mic is better than SM58?

The AKG D5 is better than the SM58 on some parameters, such as design and sound quality. Similarly, there are many other mics out there today that can probably beat the SM58 on frequency response and other technical specifications.

We can only compare on parameters; there is no clear winner here:

1. Polaroid pattern: The 58A has a super-cardioid pattern, which makes it better at rejecting noise from the sides of the mic, whereas the 58 is better at doing it from the front.

2. Sensitivity: The Beta 58A is more sensitive due to its neodymium magnet. It also has a stronger output than SM58.

3. Frequency Response: 58 Beta has a pronounced lower end and higher-end when compared with the SM58. This can be a good thing, depending on how your voice is.

4. Noise: The 58A Beta is silent. It has a pneumatic shock mount, which the SM58 does not.
Durability: Due to its more resilient grill, the 58A is stronger than the 58

Overall, the 58A Beta is a step up from the SM58. However, the SM58 remains a perfect mic to stick with if you still prefer your old trusty.

Which is better Shure or Sennheiser?

In the context of the SM58, the proper comparison will be with the Sennheiser E835. Both sound similar, but the Sennheiser mic has a stronger high end leaving you with a clearer sound. If you like instruments like the cymbal, this is the mic for you.

Shure does not need to be right in front of your face, whereas that is a bit of a problem with the Sennheiser. Lastly, the Shure SM58 looks more durable than the Sennheiser E835.

What is the difference between SM48 and SM58?

The SM58 is probably much more famous than the SM48 and the choice of singers, podcasters, and vloggers the world over. It also has a higher frequency response (50 -15000Hz). SM48 is also heavier than the SM58, which is not something that most people like.